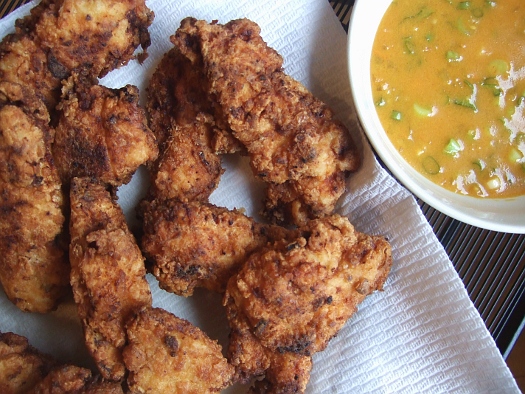 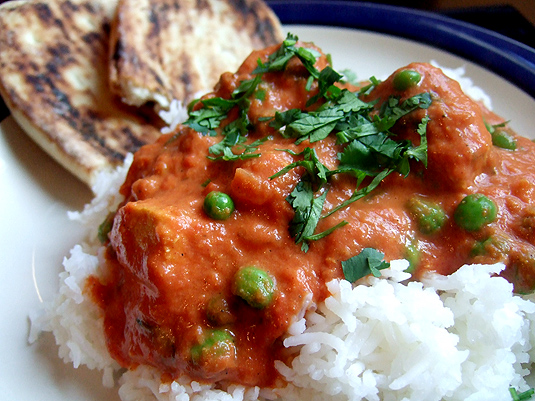 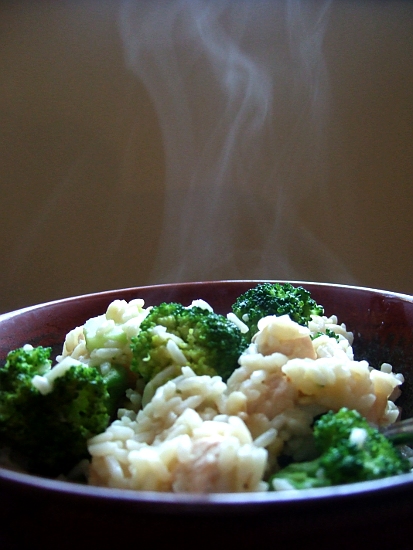 This is a recipe that was printed on the back of an Uncle’s Ben’s bag years ago. We used to eat it at my mom’s a lot, as it’s easy, fast, relatively inexpensive and good for you (perfect for weeknights!). They don’t make the Uncle Ben’s pilaf mix we used to use, but I just subbed regular white rice with some orzo pasta and it works well. I top mine with a ton of fresh lemon (or lime, if lemons are too expensive) because I’m a lemon freak and anything with broccoli gets doused in lemon.

I didn’t make this for Nick  because I figured he wouldn’t like it too much — too much broccoli and flavors that are too subtle. But surprisingly, he requests it now. The recipe as it is makes plenty of leftovers, which we love. You can easily halve the recipe if you want.

1. Brown the chicken in a Dutch oven or other pot with a tight fitting lid. Remove from pan.

2. Add butter and garlic over medium heat, saute for a minute until fragrant and butter is foamy. Add rice and toast in the pan for 4-5 minutes, until the grain obsorb the butter and turn nutty smelling.

3. Add the chicken broth and the reserved cooked chicken. Scrap the bottom of the pan to release the brown stuff (fond). Cover and cook for 12 minutes.

4. Meanwhile, chop your broccoli. I like somewhat large florets. I also peel the broccoli stems with a paring knife: slip the knife under the fibrous part of the peel, then hold it against the kinfe with your thumb and pull. It will peel off down the stem. The heart of the stems will be tender and lovely once cooked.

5. After 12 minutes of cooking, add the orzo to the pot and stir. Top with the broccoli, cover, and cook another 8-10 minutes. The broccoli will steam on top of the rice.

6. When rice and broccoli are tender, turn heat off and stir in parmesan. Season with S+P. 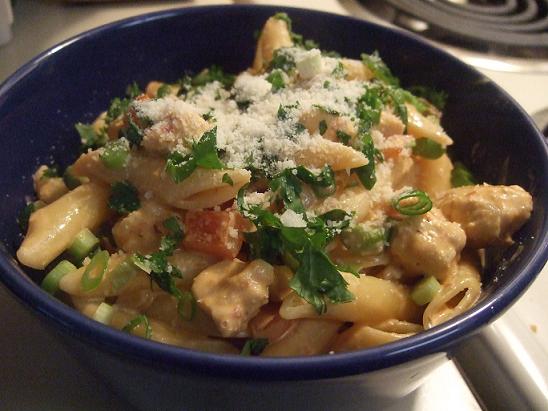 This is not exactly what you would consider a healthy dish. Though, it does get veggie-haters to eat a good amount of veggies. So maybe the veggies even out the massive amount of heavy cream….right?!

1. Cook pasta to al dente, timing it so the pasta is complete around the same time the sauce is ready.

2. Using a stick blender, or a blender jar, combine the seeded chipotles and milk until thick and foamy.

3. Clean and chop the chicken. Brown over medium-high heat until cooked through. Remove from pan. Add onions, garlic and red bell pepper. Cook 5 minutes over medium heat. Add tomato paste  and cook until caramelized, about a minute. Add milk and chipotle mixture and bring to a simmer.

4. When the pasta has 6 or 7 minutes of cooking time left, add the asparagus and the chicken to the pan with the chipotle mixture. Simmer for 5 minutes. Add cream and peas, simmer until asparagus is tender and sauce is thickened slightly. Adjust seasoning to taste. Combine the sauce with the drained pasta. Top each plate with green onions, cilantro and parmesan, to taste. 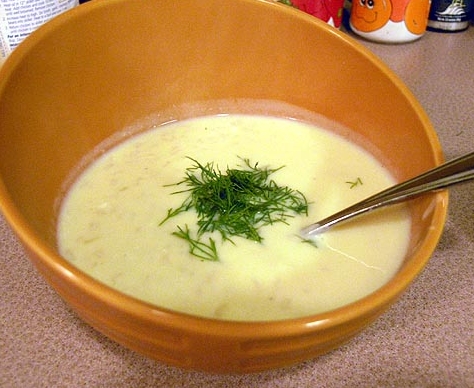 Avgolemono is a Greek lemon and egg soup, usually with a base of chicken stock.

It’s a perfect soup for a number of reasons:
Creamy but with no dairy products – lactose intolerant friendly
Can be made with veggie stock – vegetarian friendly
Super fast and only 5 ingredients – everyone friendly

The only unfriendly bit about this is the amount of eggs if you’re watching your cholesterol. I imagine you could cut down on the amount of egg yolks in the recipe if you’re concerned about it. It really only works out to about 1-2 eggs per serving, though. 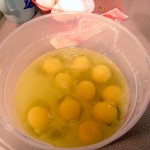 1. Bring your broth or stock to a simmer and add your rice. Cook until the rice is almost tender, about 5 minutes before it’s finished.

2. Crack your eggs into a large bowl. Juice the lemons into the bowl (through a sieve, watch out for pits!). Whisk that together well, and let it sit and come to room temperature before you proceed.

3. When the rice is almost tender and the eggs are room temperature, temper the eggs by adding a ladle of hot broth while whisking constantly. Keep adding ladles of broth one by one while whisking until you have double the liquid in the bowl than you started with. The egg mixture should now be hot.

4. Add the tempered eggs back into the pot of broth and simmer gently until the rice is fully cooked and the soup has thickened. Top with snipped dill to serve. 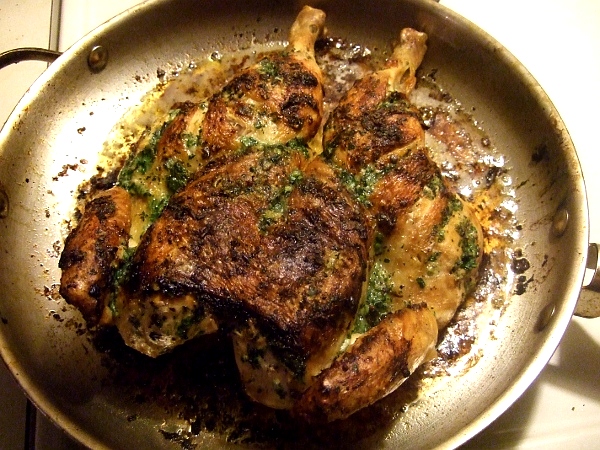 I don’t roast chickens much, but this was a pretty good one that I might do again when the roast chicken bug bites. It’s adapted from a Cook’s Illustrated recipe.

For the pan sauce:
1 c chicken broth
2 t flour
juice from half of a lemon

1.Preheat oven to 450 F.  Butterfly the chicken by cutting out the backbone, then flattening the breastbone. Make 3-4 shallow cuts on legs and thighs.

5. To make the sauce, return the pan to medium heat. Whisk in the flour. Add the chicken broth and simmer to thicken, about 5 minutes, while scraping the brown bits on the bottom of the pan. Remove from heat and stir in lemon juice and reserved herb butter. Serve over chicken. 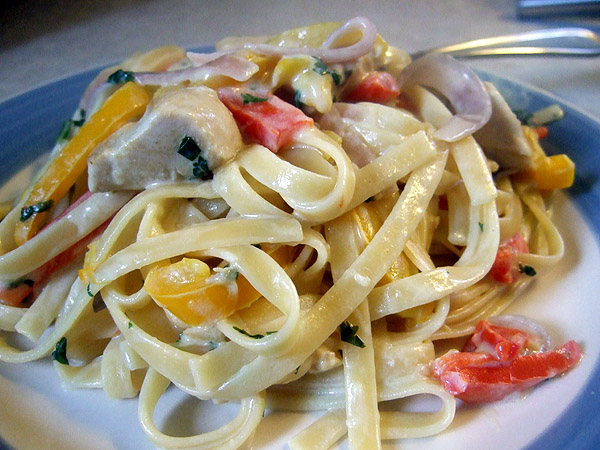 Yes, some of you may recognize this dish. It is a rip off of a California Pizza Kitchen dish. And it’s pretty good. Though, Nick didn’t like it much, because he’s got an issue with onion and bell pepper textures, and thought the flavors were too subtle. He likes flavors that hit you over the head. But don’t listen to him, it’s good.

1. Cook pasta in salted water until al dente. Time is so it’s finished around the same time as the sauce.

2. Clean and chop chicken. Saute until browned and cooked through in a large skillet, about 6 minutes. Remove from pan.

4. Toss sauce with pasta, cilantro and lime juice before serving.