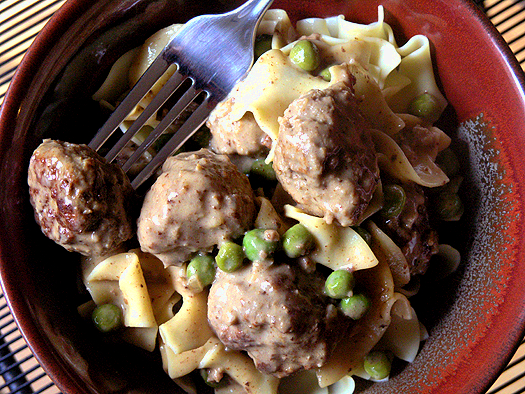 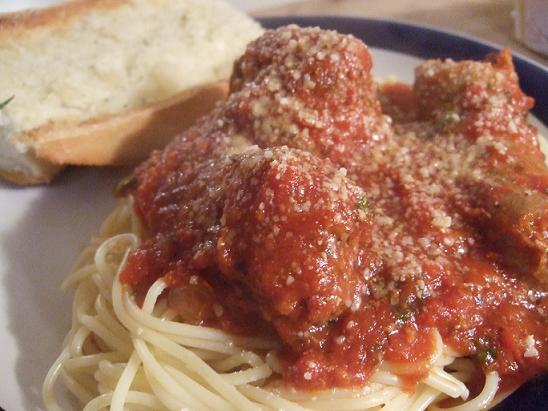 This is perfect for winter, or summer when you want comfort food but don’t want to heat up the kitchen. OK, it’s perfect any time. I make an entire 6-quart crock full, and plan on having leftovers for a week. I usually make around a dozen meatballs and add 5 hot Italian sausages. We always say we’re going to make meatball or sausage sandwiches later in the week, but somehow we always just got back to pasta. Because mmmm, pasta.

1. Make the meat-a-balls. Combine everything but the beef in a bowl. Add the beef, and combine well. Salt liberally (if you’re unsure of the seasoning, you can cook a small amount of the mixture in a skillet before shaping the meatballs.) Shape the mixture into balls. I usually make them slightly bigger than golf balls, but size is up to you. Place on a baking sheet lined with silpat or foil, and bake at 450 F for about 20 minutes until browned. They do not need to be cooked all the way through.

2. While the meatballs are baking, sear the Italian sausages in a pan so the casings are brown and crisp, and put into the crock pot.

3. Make the sauce. In the same pan you browned the sausages in, add your onion, garlic and bell pepper. Saute for 5 minutes, then add tomato paste and stir until caramelized. Add wine and deglaze the pan. Add spices and reduce the mixture until there is almost no liquid left. Add one can of tomatoes, bring to a simmer, then pour into the crock pot. Add the other two cans of tomatoes and stir to combine.

4. Place meatballs directly from oven into crockpot. Cook on low for 6-8 hours, or on high for 3-4 hours. Serve over pasta with parmesan.