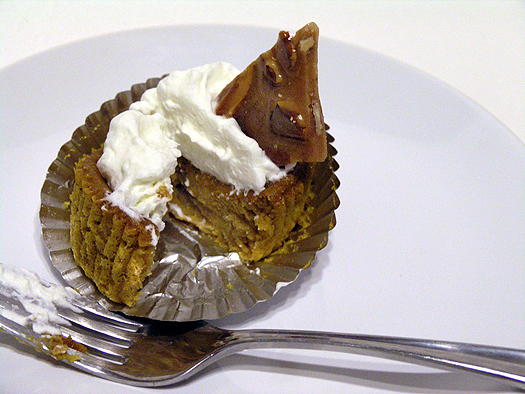 I wasn’t really sure what to call these. Pumpkin pie cupcakes is clumsy and implies a cupcake, which this really isn’t, except for the liner. This is more like a pumpkin pie without the crust. It’s pumpkin pie filling, with a little bit of flour to hold it together and leavener for just a bit of airiness. The edges set up into almost a cake, and the middle stays custardy. And because they fall in the center as soon as you take them out of the oven, they’re just begging for a dollop of whipped cream.

I made these for a work potluck because, having made them before, I knew they were easy to make and perfect for grab-and-go. The only problem was the whipped cream, which would have wept if I made it the night before. So that brings us to the stabilized whipped cream. It was the first time doing so, and I don’t believe I dissolved the gelatin completely before adding it, because there were a few little pearls of gelatin here and there. I doubt anyone but me noticed, though! It didn’t weep, though, so that was ultimately a success.

The pecan brittle was just a little extra something. And boy was it good. I debated using pumpkin seeds, but they were the same price as pecans, and frankly I couldn’t see myself using the leftover pumpkin seeds. So pecans it was. And what a good decision that was! The smell as you’re making the brittle is exactly like pecan pie. The smell is almost better than the finished candy, if you ask me!

I adapted the pumpkin recipe from this blog, but made a few key changes. First, I omitted the generic pumpkin pie spice in favor of my own spice blend. Second, I extended the baking time, because 20 minutes really left you with a mushy product. Yes, it’s custardy, but it should still be firm. Also, don’t be afraid of filling your cupcake liners almost full. Normally that’s a bad idea, but these puff only slightly, and more importantly, fall quite a bit when cooling. 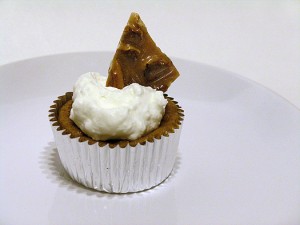 2. In a Kitchenaid or large bowl with a whisk, combine eggs and sugars. Add pumpkin, half and half and vanilla and combine.

3. Add your dry ingredients, and combine until smooth.

4. Fill liners almost full, then bake for 23-26 minutes until the top is no longer sticky to the touch. Cool, and serve with whipped cream. Makes a dozen.

1. Add gelatin to cold water in small saucepan and bloom until thick.

2. Cook over low heat until gelatin is completely melted and there are no little pearls of gelatin left. Cool slightly.

3. Whip cream until slightly thick, then pour gelatin into it while whipping slowly.

4. Add sugar to taste, then continue to whip until stiff. 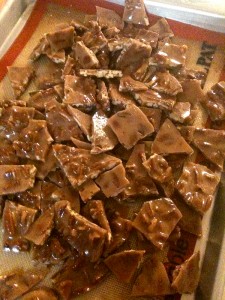 1. Prepare the pan you will be pouring the candy into. Use a half sheet pan, or other large sheet pan with low sides. Use silpat if you have it, otherwise coat the pan with cooking spray or butter.

2. In a heavy saucepan or enameled dutch oven with a lid, combine the sugar, water and corn syrup. Cover the pot and bring to a boil over high heat. Swirl the pot occasionally to ensure the sugar melts evenly. Keeping the lid on will cause the steam to condense and drip back down the sides of the pot, preventing any sugar from recrystalizing. If you have no lid or crystals form, you can also wipe down the sides of the pot with water using a pastry brush.

3. Once boiling, insert candy thermometer and boil until it reaches 230 degrees, only about a minute later.

4. Add the pecans and stir constantly with a metal or silicon spatula until it reaches 300 degrees, about 15-18 minutes.

5. Remove from the heat, and immediately add the butter, vanilla and baking soda and stir quickly. It will foam and sizzle.

6. Pour down the center of your pan and spread out so the nuts are in an even layer. Let sit until cool, and break into pieces.